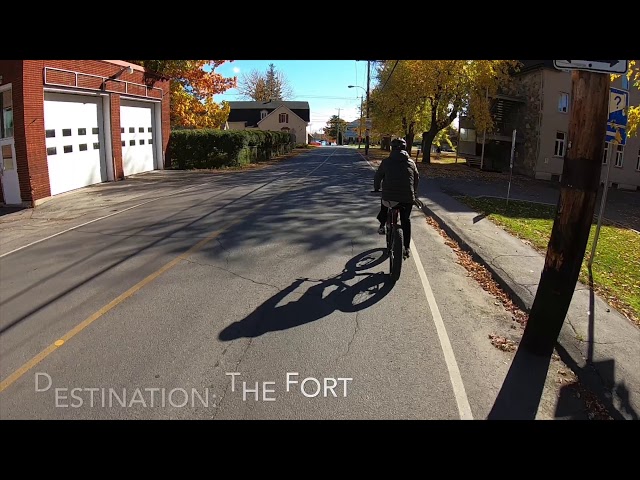 When we decided to head towards Pointe-des-Cascades for a new bike ride, we had no idea that we would witness such beauty. We chose that destination because we found that from Parc Saint-Pierre there is a bike trail that sides a canal (the Soulanges Canal Trail) and leads through some historic locks. What we found was much more than that!

Pointe-des-Cascades is a small peninsula in the municipality of Vaudreuil-Soulanges that lays in between l’Ile Perrot island and la Grande Ile of Salaberry-de-Valleyfield. It’s just off the Montreal island, on a split of land where the Saint Lawrence flows into Lake Saint-Louis. The river has significant drops here, hence the name of the village. The Soulanges canal holds a historic importance: back in the 1700s, it allowed ships to bypass the rapids between Lake Saint-Louis and Lake Saint-Francis. Now the canal is abandoned, but still offers beautiful views and a quiet place to stroll and exercise.

We started our bike ride from Parc Saint-Pierre (there’s free parking available), where we could immediately enjoy the beauty of the foliage. Progressing West, the historic locks are not far. We stopped stopped to admire the colours of the foliage above and underwater, with its incredible patterns. The architecture of the canal is quite impressive, too, with its basins and arches that reflect into the perfectly still water of the canal.

At 10 kilometres from the Pointe-desk-Cascades, we have met the former hydroelectric power station of Les Cèdres. This is a castle-style industrial building built in 1899 that straddles the regulation dike of the Soulanges canal. The building is a rectangular red brick building capped with gable roofs that stands out for its architecture and the incredible view over the canal entering the Saint Lawrence River. The site is indeed considered a cultural heritage site of Quebec, and its view alone pays for the time it takes to reach it.

However, the path was so beautiful that we have decided to push our bike ride 8 kilometres further, until the fort of Coteau-du-Lac. Another national historic site, this was a portage and encampment location used by Amerindians to avoid the rapids, a military fortification, and a canal that opened the way for commercial shipping.

The remaining of the fort are on a small hill on the bank of the Saint Lawrence, and it offers plenty of beautiful sights. Not far from there is the watermill Callieres di Jasmin, that also features a lovely garden. Even if going back all that way was quite challenging, it was definitely worth it. Before leaving, we stopped at the Pointe-desk-Cascades park to see the locks from above. It’s a spectacular view that left us puzzled, as it looked like the water from the canal enters the Saint Lawrence on an angle.

There’s so much to see and enjoy in the area: this is definitely a fascinating circuit that we cannot recommend enough!

Hikes and Rides Hot spots On the road

This site uses Akismet to reduce spam. Learn how your comment data is processed.